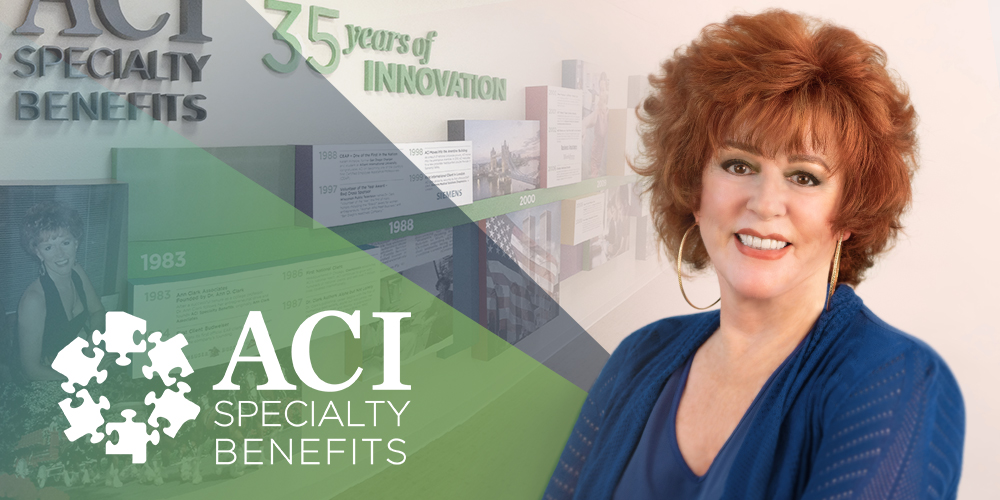 After serving as Founder and CEO of ACI Specialty Benefits for nearly four decades, Dr. Ann D. Clark has decided to move forward, focus on new ventures, and prepare ACI is for its next chapter. Widely-recognized as an industry trailblazer, Dr. Clark founded the first-ever woman-owned EAP and led ACI to achieve Top Ten EAP ranking for over 20 years, CIO 100 Award, Best EAP Technology, San Diego’s Healthiest Company, Work-Life Innovation Award, and Top Ranked Woman-Owned Business year after year. Known for breaking barriers, Dr. Clark has been named 5-Time Most Admired CEO, Woman of the Year, Women Who Mean Business, and the 2020 recipient of the first-ever Leaders and Legend Award.

Dr. Clark’s visionary leadership and industry influence is undeniable, and her drive and passion have inspired generations to come. As Dr. Clark steps down as CEO, ACI will now be part of the AllOne Health family of companies, and the entire ACI team remains on board to support and serve 11,000 customers worldwide.

“While the future holds limitless potential, I am also humbled and overwhelmed with gratitude for what ACI has accomplished over the years,” shares Dr. Clark. “There is a gorgeous timeline of highlights mounted across the wall at ACI’s headquarters, and in walking past it every morning, I always marvel at just how many firsts have been achieved: first international client in 1987, first EAP with full-service concierge, first groundbreaking SOAR Student Assistance Program, first mobile award for the ‘Get Fit Cell Phone Diet’ before apps even entered the marketplace, and the list goes on and on. Yet all these awards and achievements would not be possible without the unwavering commitment and dedication of everyone at ACI, and I could not be more proud.”